Do you enjoy really long walks? By the seaside or greenery? If you enjoy lengthy “anythings”, then you’ll definitely enjoy sounding this lengthy madd… 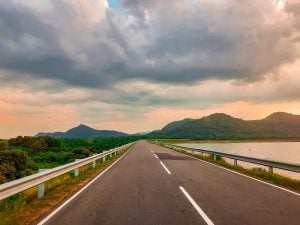 In this post I will discuss the right branch of al-madd al-laazim.

The right branch is kalimee (word based). This branches out again into two types, the first, muthaqal (heavy) and the second, mukhaffaf (light).

The rule for necessary prolongation is an occurrence of a grammatical (Arabic) rule. This rule says that no two saakin letters can follow one another (as this is very difficult on the tongue). To abide by this rule, a madd is slotted between the two saakins for 6 counts. Let’s now differentiate between light and heavy word based necessary prolongations.

Al-madd al-laazim al-kalimee al-muthaqal (heavy word based necessary prolongation) occurs in words that have a laazim saakin letter (where the letter has sukoon as part of the original make up of the word) after a harf madd. This sukoon is a result of a shaddah. As explained in a previous post, a shaddah causes a letter to be doubled where the first occurrence has a sukoon, and the second has a diacritic (more about shaddah here). Examples of al-madd al-laazim al-kalimee al-muthaqal are as follow:

Al-madd al-laazim al-kalimee al-mukhaffaf (light word based necessary prolongation) occurs in a word where a harf madd is followed by a laazim saakin letter whereby this sukoon is not merged with another letter. What does this mean? Just above I said that a shaddah causes the doubling of a letter, and hence, you are merging the first occurrence with the second to make it sound as 1 mushaddad letter. In this case, the letter with a saakin is not because of a shaddah, it is just a sukoon ( ْْْْo ْ) that is part of the original make up of the word. This type of necessary prolongation is sounded for 6 counts.

This type of madd only occurs twice in the Quran. The word is the same, even the surah is the same. Here it is:

Considering this madd is so long, I’ve tried my best to keep this post short!

Hope everything makes sense, though. Let me know if it doesn’t.