We often hear the term Islamic Faith, its correctness and soundness in the heart, and acting upon it without doubt, and that it is the basis of the Islamic religion; if it is correct, consequently all deeds and actions depending on it will be correct.

What is the correct faith?

Defining faith language: The meaning is taken from the verb to contract, which is: to link and tighten strongly and tightly, and so on, which is documented and certain.

Defining faith idiomatically: It is what a person’s heart agrees upon and is certain of, and that he adopts as a religion and a sect.

As for the Islamic faith: It is the firm belief in God, His Angels, His Books, His Messengers, and the Last Day, and the Pre-Ordainment, it’s good and its evil, and belief in all that the Qur’an brought, and in all that the Prophetﷺ, brought, believing and acting upon it without doubt, and full acceptance of the Oneness and Lordship of God and His Names. His Attributes, and belief in all that the authentic texts brought from the origins of the religion and the matters of the unseen and its news, and enters into the creed as well as the postulates of scientific and practical matters; Such as adherence to virtues and good morals and the negation of everything that is against it.

The Book of God and the Sunnah of His Prophetﷺ, have made it clear to us that the correct belief is summed up in: belief in God, His Angels, His Books, His Messengers, the Last Day, and the Pre-Ordainment, its good and its evil.

And the belief origins that God Almighty commanded us to believe are what came in the famous hadith of Gabriel when he asked Our Noble Messengerﷺabout faith, and he, ﷺ, said: (To believe in God, His Angels, His Books, His Messengers, the Last Day and the Pre-Ordainment, it’s good and it’s evil) – Narrated by Muslim.

There are six (6) pillars of faith. These pillars consist of: 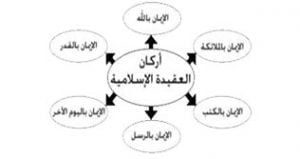 Belief in His Angels

Belief in His Messengers

Belief in His Books

Belief in the Last Day

The Fundamentals and components of the correct faith :

The Methodology of Ahlus-Sunnahwal-Jama`ah in Receiving the Creed:

True faith is the belief of the heart and expression upon the tongue and action upon the limbs, it increases with obedience and decreases with disobedience. In this sentence, the faith concept is confined to Ahlus-Sunnahwal-Jamaa’ah.

– Complete submission to everything that came from God Almighty in His Book (Tawhid ).

– Invoking everything that is authentic from the Messenger of God, ﷺ.

– The texts of the Book and the Sunnah do not contradict rational evidence, for the correct texts are in agreement with what a sound mind decides.

-The Companions, (RA), were the most knowledgeable of people after the Messenger,ﷺ, in the belief, and therefore their interpretation of the legal texts is an argument.

-Following and abandoning bida (innovation)( heresy) in religion, for innovation is one of the greatest doors to misguidance and division.

The pillars of faith are Belief in God, His Angels, His Books, His Messengers, the Last Day, and Pre-Ordainment, it’s good and it’s evil. It is divided into two parts: basic general rules, which are the clear ones indicated by the legal texts, and precise issues where some of them may be ambiguous.

These six pillars are the creed’s foundations, and as for the subtle differences that come in some of them, they are in the branches, and for this, we must know that very large issues are under these pillars, and among these issues are what are fundamental and essential, and they are the ones on which the text came in the Qur’an and the correct Sunnah, and some of them are precise and ambiguous issues in which there is disagreement, and this is not from the creed’s principles, but rather it is from the issues ofاجتهاد  “Ijtihad”(independent reasoning, disciplined, academic research )in which the dispute occurs, such as the messengers’ number is not considered from the creed’s principles because there is no messengers’ specific number, but the belief in the messengers and their names that are mentioned in the Qur’aan is one of the creed’s fundamentals.

Given the importance of the Islamic faith and the need for its stability, it has two main sources, which are the basis of religion: the Holy Qur’an (God’s Words), and the hadiths reported from the Prophet, ﷺ. Therefore, it is necessary to submit to God Almighty and His Messengerﷺ, as a large part of it is unseen, and the unseen is usually not comprehended by minds, you should not go into it.

And the consequences of believing in the fundamentals and the branches, ImamIbn al-Qayyim, may God have mercy on him, said:

(They divided the religion into scientific and practical issues and called them fundamentals and branches, and they said: The right in matters of fundamentals is one, and whoever opposes it is an infidel or a sinner. As for the issues of the branches, God Almighty does not have a specific ruling in them, and error is not imagined in them. And every مجتهد “mujtahid” “jurist” (An Islamic scholar who is qualified to perform ijtihad)  is right for the rule of God Almighty, which is His rule, and this division, if it comes back to mere terminology, is not distinguished by what they called the principles of what they called branches, so how when they put rules on it and put them with their minds and opinions… Including: proving the branches with the news of the units without the origins, and so on. Every division to which the Book, the Sunnah, and the principles of the Shari’a are not attested by consideration, is an invalid division that must be abolished.

Religion and creed represent a way of life, and the correct creed includes ethics that are considered the cornerstone for consolidating the religion morals and applying them to our relationships and transactions. Therefore, IQRA Network sought to provide an integrated educational program that consolidates Islamic belief concepts and monotheism.

An interactive and simple program that instills a seed of faith in Muslims’ hearts since their early childhood.

A team of professors and sheikhs, Islamic studies graduates from Al-Azhar , they devoted themselves and spared no time to design a curriculum in Arabic and English adopting interesting methods of teaching, taking care of instilling the principles of the correct Islamic faith that changes the Muslim’s behaviors for the better and  remains as a cornerstone for the learner in the following issues:

The Month of Rajab

The months of Islam are important for Muslims to know. Four months are sacred, and one of those is the month of Rajab. Learn more.

A Dua for Help in all Affairs

The Supplication of Musa (as) The Quran contains many amazing duas (supplications).  With something a believer should say, such as the dua for getting into

Calling all newlyweds! We have three pieces of advice for Muslim marriages! Read more to learn how to create a positive marital environment.