Let’s look deep into ourselves and evaluate our current state. Along the way, do stop and take a look at your throat. Three makhaarij, six letters: your throat’s doing a lot more than you probably thought… 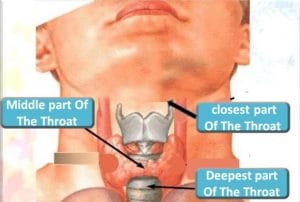 Al-Halq: emerging from the throat are six letters. Within the throat, there are three points of articulation. Two letters emerge from each makhraj. Let’s take a look at these with detail. 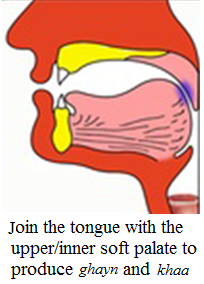 From the upper throat emerge two letters. These are

It is erroneous to pronounce these two letters from the mouth, and every effort should be made to distinguish the upper throat from the inner mouth area. Note that ghayn is articulated from the same makhraj, but just below the khaa.

The mid-throat is the point of articulation for the following two:

It is important to understand that haa ( ح ) and haa ( هـ ) are not the same, and that haa exhibits a much sharper sound and is articulated slightly above the ‘ayn.

The deepest part of the throat produces two letters,

A glottal stop is defined as “a speech sound produced by a momentary complete closure of the glottis, followed by an explosive release”. The haa emerges from the same area but just above the hamzah‘s point of articulation.

So far, this covers a total of 4 of 17 makhaarij. Hope you’re ready to explore some more

in the meantime, have fun by practicing these articulation points and enjoying the wondrous sounds they produce!

Note, this document is found on the resources page.