Buffing up is one of those things you see teen boys doing a lot. But what they fail to do is some Tongue Buffing Exercises. Check out all the cool moves you can do below… (and this is just part one)!

Al-lisaan: contains makhaarij for 18 letters. These are divided across 10 points of articulation, which are categorised as 4 main areas. These are: Aqsal-lisaan; Wasat Al-lisaan; Haafat Al-lisaan; and Ra’s Al-lisaan. Let’s look at some of these in detail.

This area is divided into two points of articulation. 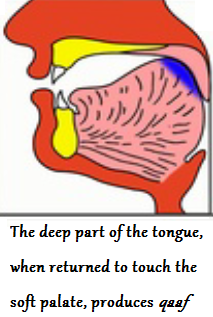 1. The innermost part of the tongue with what corresponds to it from the upper (soft) palate produces

This area is the closest to the throat, and qaaf is produced with isti‘laa’ [2] (heaviness or pressure); more correctly, however, isti‘laa’ is the elevation of the tongue towards the roof of the mouth (to that which is opposite to it) after the sound is produced. 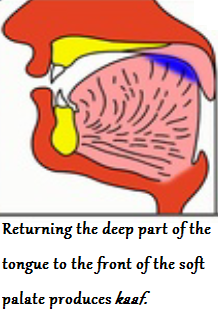 2. The innermost part of the tongue, towards the mouth, with what corresponds to it from the upper palate produces

This area is slightly closer to the mouth than throat. Kaaf is produced with istifaalah [3] (lightness) or lowering of the tongue towards the ‘floor’ of the the mouth after the sound is produced. These two letters are referred to as Al-Lahawiyyayn [4] because their makhraj involves the uvula (called lahah or lahaatul halq in Arabic).

The mid-tongue with that which corresponds to it from the hard palate produces 3 letters.

It is important to note that the yaa being referred to is not the yaa maddeeyyah; which means it is the yaa with a fat-ha such as in the word

or the yaa with a dammah, such as in the word

or the yaa with a kasrah, such as in the word

or the yaa with a sukoon, such as in the word

Finally, it is also important to note that by mid-tongue we’re referring strictly to the upper side, called thahrul-lisaan [6]. These three letters are called Al-Ahruf Al-Shajareeyah [7] because they emerge from what is called “Shajar Al-Lisaan“. This, simply put, means these letters originate from the ‘core of the tongue’. 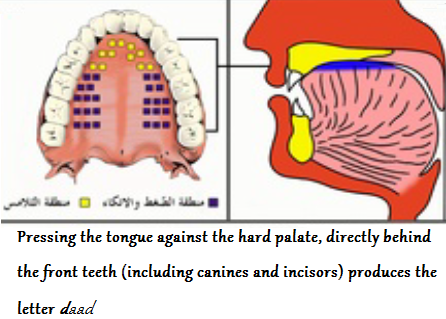 The edge of the tongue, alongside the inner faces of the top left and/or right molars, produce the letter

More often, the left molars only are involved in producing the daad as this is easier. Knowing the point of articulation and mastering it is important. Commonly, this letter is transliterated into dh which I find may be confusing, especially in words where the letter haa or haa follow. Example: the word ( أضحى ), as I’d spell Adhaa or even Ad-haa would then need to be written as Adhhaa but is often written as Adha. Complications can occur, but only stringent Arabic teachers (and alike) should take note of these and avoid them when teaching. 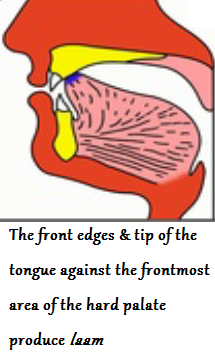 The (front) edge (i.e. tip and fronter edges) of the tongue with that which coincides with it from the upper gum/palate is the makhraj for the letter

The “gum” being referred to here is that which is behind the front molars, incisors and canines, i.e. the hard palate. Usually the righter side of the edge produces laam. Nevertheless, it is important to ensure the edges are producing the laam, and not just the tip of the tongue.

Well! The second part of this tongue-buffing-course is soon to come. Until then, enjoy the 9/17 makhaarij you’ve learnt so far. Begin by revising today’s makhaarij post with this chart: 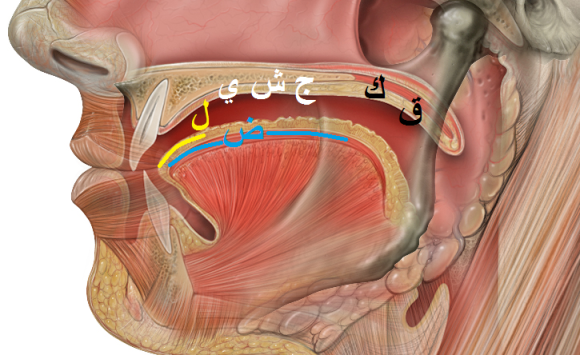 Note, this document is found on the resources page.